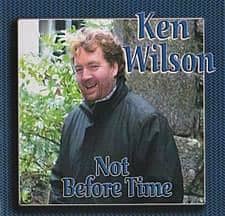 This album is a collection of songs, some of which I have been singing for the past 33 years and others I have collected along the way. As a young lad back in the seventies, going to my first folk clubs and festivals I was heavily influenced by all these songs that I hadn't heard before and the style they were being sung in by the likes of Fred Jordan, The Watersons, Swan Arcade, Martin Carthy, Peter Bellamy, to name but a few.

I could go on but undoubtedly the greatest impact on me, was the late, great Tony Rose. In my mind, the finest singer of folk songs I have ever had the pleasure of listening to. He is sadly missed. As a member of the Wilson Family, I have recorded many times over the years but this is the first time I have entered a recording studio to record a solo album. As the album title, Not Before Time suggests, I have been told on numerous occasions by friends and family, not least by my beloved partner Chris, that I should record these songs.

So, I dedicate this album to Chris and our collective family Adam, Lee, Barrie, Alan and Sian, whom I love dearly. Special thanks to Barrie & Ingrid Temple, for their kind words of encouragement prior to and during this recording. 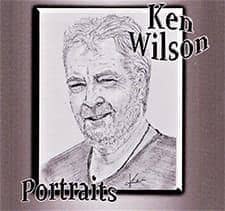 This my second 'solo' album is again a mix of Traditional and contemory songs! I have dedicated the album to my three grandsons Alex, Ethan and Jack, in the hope that one day they will also take up the songs and enjoy singing them as much as I do. Ken. 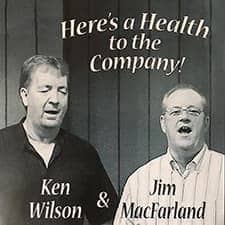 Here's a Health to the Company

Jim MacFarland is a Derryman and is one of Ireland's finest traditional singers. He is also known for his collection of songs from the Irish source singers.

Ken Wilson is from Teesside in the North of England, part of the wonderful Wilson Family but a fine singer in his own right. They have known each other for the past fifteen years or so and have always had a mutual respect for each other's singing. In 2013 they were asked to tour in Ireland and perform their mixture of both Irish and English traditional songs. Since then they have appeared at a number of clubs and festivals in the UK and Ireland.